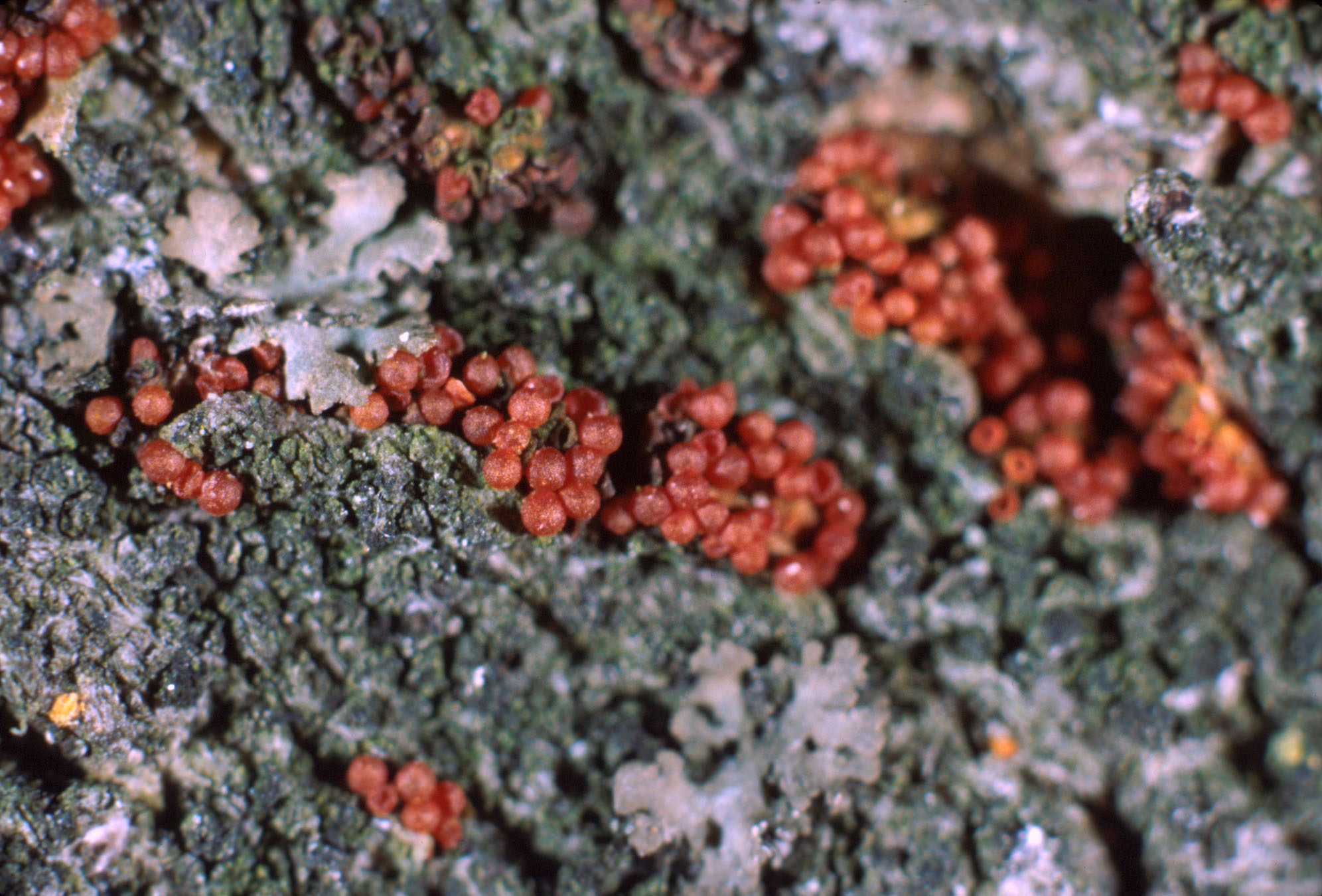 Beech bark disease (BBD) occurs as the result of an insect-fungus complex where an invasive beech scale insect (Cryptococcus fagisuga) feeds on the bark of the tree, creating cracks that allow a native canker fungi (Nectria) to enter. Between 50-85% of infected beech trees will die within 10 years of infestation. The scale insect comes from Europe and was first introduced into Nova Scotia in the late 1800s. Beech bark disease can be found throughout all of the maritime provinces and has moved through the beech bark range into Quebec and Ontario.

Beech bark disease attacks beech trees in North America and is caused by the combined effects of the non-native scale insect, Cryptococcus fagisuga, and Neonectria fungi. The scale insect feeds on the beech tree sap, opening wounds in the tree for the fungus to start colonizing the bark, cambium layer, and sapwood of the tree (OFAH/OMNR Invading Species Awareness Program, 2012). This disease causes severe cankering on beech trees, deformation of the stem, and eventual tree death.

The insect, cryptococcus fagisuga: The scale is a yellow, soft-bodied insect that is approximately 0.5-1.0 mm long as an adult. Females are legless and wingless and use 2.0 mm stylets to attach themselves to the trees. During the nymph stage, the insects secrete a white woolly wax to cover their bodies. This can make the tree look like it’s covered in wool (Global Invasive Species Database, 2011). The scale will feed on the beech bark, creating punctures that, in turn, produce cracks on the surface of the bark. The fungus then has the ability to enter through the cracks and infect the tree. The fungus will cause small cankers that appear on the bark surface, from which small, orange-red fruiting bodies are produced in late summer and fall (OMNF, 2014).

The advancing front begins when the non-native beech scale insect arrives and rapidly proliferates. During this phase, ecosystem changes are minimal, but the increasing density of the scale makes the stand susceptible to infestation by the Neonectria fungi.

The killing front refers to stands of trees with high densities of beech scale, severe attacks by Neonectria, and large beech trees reach 50-85% mortality within 10 years of infestation.

The aftermath forest consists of stands that have survived the first wave of beech mortality. Prevalence of understory suckers from the roots of attacked parent trees has increased. The root suckers will choke out natural regrowth of desired species such as maple and birch, and then will subsequently become infected with beech bark disease.

Beech bark disease is found on American beech (Fagus grandifolia) and European beech (Fagus sylvatica). Beech bark disease is most often found in mixed-hardwood forests. Trees are at increased risk for BBD where there are nutrient imbalances in the forest. Weather conditions (such as temperature and autumn rainfall) can affect scale populations and therefore the prevalence of BBD. Some beech trees may exhibit resistance to the scale insect.

Beech scale, Cryptococcus fagisuga, is native to Europe and was introduced to Halifax, Nova Scotia in the late 1800s (Loo, 2009).  The scale insect continues to move throughout the natural range of beech trees and is now found throughout the maritime provinces, several states in the eastern U.S. as well as Quebec and Ontario.

The scale insects are spread by wind, animals, and through human movement of beech wood that has intact bark. Beech bark disease results when beech scale is combined with Neonectria fungal spores.  Fungal spores, spread by wind and rain splash, move into the trees after they are attacked by the scale insect (OMNRF, 2014).

Beech trees are valuable nut-producing trees, providing an important source of mast for many forest-dwelling birds and animals. Therefore, the loss of beech trees from the landscape would mean a lost food source for wildlife. Black bears rely heavily on beech nuts for food within northern hardwood forests (Loo, 2009).

The loss of beech trees can also cause a shift in forest structure, resulting from loss of canopy cover, the increase of root suckers from dead trees, and an increase in coarse woody debris from dead trees on the forest floor (Loo, 2009). BBD results in a shift toward younger, smaller forests.  In addition, BBD may cause long-term changes to species composition in a forest. Young beech saplings proliferate in the understories of BBD-impacted forests adversely affecting biodiversity.

Since beech bark disease is still progressively moving through North American forests, the long-term ecological impacts of the invasive are yet to be fully understood (Loo, 2009).

Healthy beech trees can grow to become beautiful, large hardwood trees. The loss of beech trees could mean a decrease in the aesthetic value of hardwood forests within Ontario. In the maritime provinces, where beech bark disease has been around for decades, the majority of beech trees are gnarled and disfigured by the bark disease, making them quite displeasing to look at.

The effectiveness of using systemic insecticides such as imidacloprid to control beech trees is uncertain (Cale et al., 2017). Imidacloprid alone seems to be ineffective at controlling beech scale on trees even with annual reapplication but a study by Roberts (2013) shows that annual imidacloprid injections and buprofezin spraying prevents been scale infestation (Cale et al., 2017). Chemical approaches to control BBD are costly and likely to be non-feasible for use in forest settings.

A mortality risk classification that considers tree diameter, crown damage, branch stubs, sparse crown foliage, and decay fungi presence can be used by forest managers to determine which tree to harvest in stands with impending disease-induced mortality (Cale et al., 2017). In addition, selection cuttings that remove trees that are infested and infected by beech scale or Neonectria spp. may reduce future mortality by limiting the spread of these agents to healthy beech.

Trees with apparent resistance to beech scale should be retained to improve species diversity, sustain an important wildlife resource and improve beech wood quality.  Trees that wall off their cankers (form layers beneath the canker to prevent them from reaching and killing the cambium) are considered to be tolerant and are also potential candidates for retention. 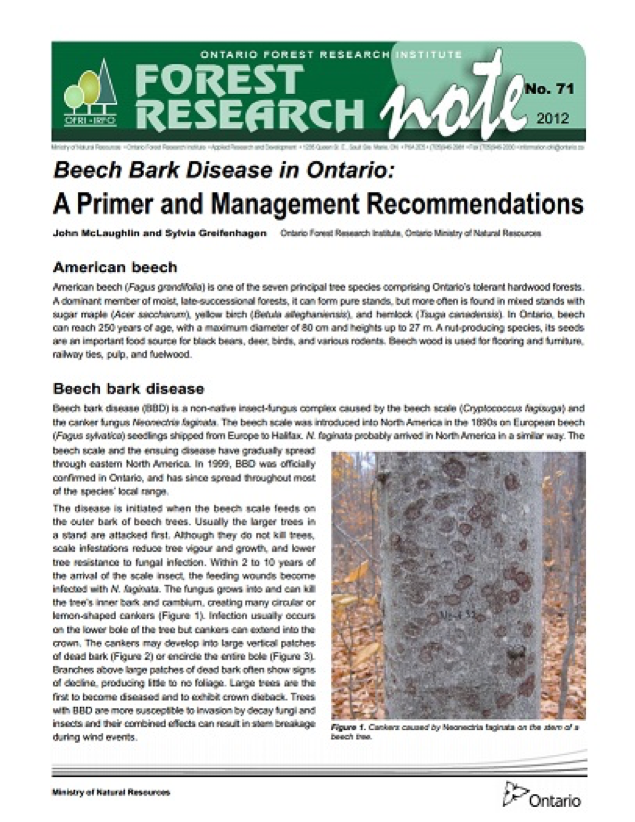 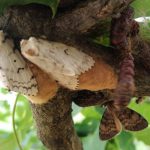 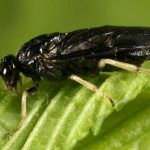 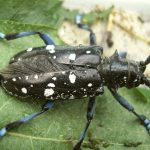